The Inverness Fire Department and Citrus County Fire Rescue have inked a mutual-aid fire agreement to define what both organizations will do to handle fires in the county. (March 11, 2019)

A Corrections Officer who lives in Inverness has been charged with sexual battery in Marion County following a police investigation into the matter.

A Corrections Officer who lives in Inverness has been charged with two counts of sexual battery following a police investigation into the matter.

Arrested and charged was James Touchton of Inverness, 37, who was a correctional officer at Lowell Correctional Institution for women at 11120 NW Gainesville Road in Ocala.

END_OF_DOCUMENT_TOKEN_TO_BE_REPLACED

At approximately 11:47 a.m. this morning, February 7, 2019, Citrus County Sheriff’s Office Tactical Impact Unit (TIU) detectives were at a home in Inverness for a drug investigation. While transporting a suspect to the jail, detectives noticed a passing vehicle, with an occupant believed to have an outstanding warrant.

A marked patrol unit began to follow the vehicle in an attempt to conduct a traffic stop. After the vehicle pulled over, a CCSO deputy and two TIU detectives approached the vehicle. During their investigation, an unidentified suspect within the vehicle began to resist commands.

END_OF_DOCUMENT_TOKEN_TO_BE_REPLACED 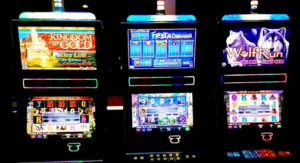 Citrus County deputies on Thursday shut down two gambling storefronts, one in Inverness and one in Homosassa.

Citrus County deputies on Thursday shut down two gambling storefronts, one in Inverness and one in Homosassa.

The Citrus County Sheriff’s Office’s Tactical Impact Unit (TIU) and detectives took down The Time Square Internet Sweepstakes Cafe at 3814 East Gulf to Lake Highway in Inverness and at Lucky U 777 at 3538 S Suncoast Blvd. in Homosassa. The search warrant executions are the result of a several week’s investigation into illegal gambling establishments in the community.