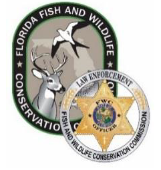 The FWC aviation crew advised they had viewed a stone crab vessel in closed zone 2. That vessel began making circles in the area to retrieve their traps from the bottom, actively fishing their traps in a closed area.

“When the vessel crew of the Nauti Crab noticed our patrol vessel headed toward them, the crew dropped all of the stone crab gear to the bottom,” said Lt. Scott Smith. The captain stated they had broken down and just fixed their vessel. They insisted they had not been crabbing in that area.”