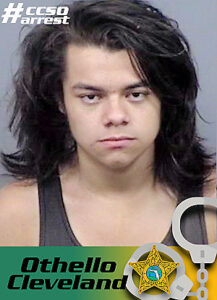 On Sunday, the CCSO was dispatched to a business in the City of Inverness in reference to a possible shooting.

The victims told deputies that, as Cleveland drove away from the scene, he fired several rounds out of the window of his vehicle in the direction of the victims.

CCSO Detective Thomas Dowling with the CCSO Major Crimes Unit (MCU) was contacted and responded to the scene.

Deputies were able to make contact with Cleveland a short time later at a residence in Inverness. He was detained, and deputies were able to determine no one was injured during this incident. Cleveland had a firearm in his possession matching the description given by the victims and two more firearms were located inside of the residence.

During an interview with Detective Dowling, Cleveland made admissions to both displaying and discharging a firearm during an argument with the victims.

Cleveland was placed under arrest for one count of Discharging a Firearm From a Vehicle and two counts of Aggravated Assault with a Deadly Weapon. His bond was set at a total of $19,000.

“This incident could have had tragic consequences due to Cleveland’s willful and wanton disregard for public safety,” said Citrus County Sheriff Mike Prendergast. “He chose to drastically escalate a minor disagreement by brandishing and discharging a firearm. Thankfully no one was injured and the Citrus County Sheriff’s Office was able to quickly take him into custody.

“The swift response by Patrol Deputies and Major Crimes Detectives has once again made Citrus County a safer place to live.”